The La Sportiva TX Guide is at home on both flat terrain and near-vertical crags. It’s a great choice for fast-and-light hikers on technical terrain.

As the horizontal world of running and the vertical world of climbing start to blend, there is a gap in technical footwear suitable for these hybrid adventures. You either lean toward a trail-running shoe that runs better but lags in climbing ability, or you go with an approach shoe that climbs well but offers a less-than-desirable ride while running. 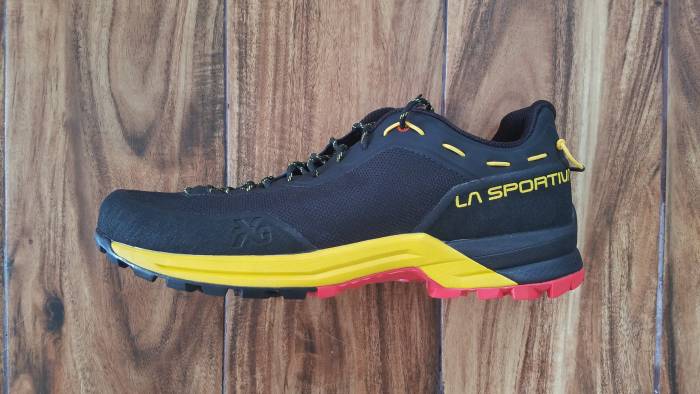 Of all the companies situated to make a first-class hybrid running approach shoe, La Sportiva comes to mind first.

It already produces some of the world’s best rock climbing, approach, and running shoes. Imagine if the running and climbing teams at La Sportiva collaborated on a shoe that runs like the Bushido, climbs like the Solution, and scrambles like the TX4! Every athlete who moves fast in the mountains would own a pair.

While La Sportiva’s latest approach shoe isn’t quite as dreamy as my imaginary perfect shoe, it’s a step closer. 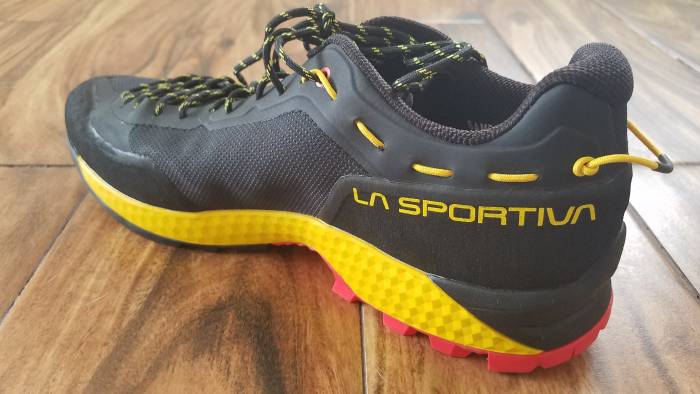 The midsole is rather firm with little flex thanks to a rigid TPU Torsion Shank. This works well carrying heavy loads through talus fields, but not as well on a smooth running surface. Despite the firm undertone, it’s rather comfortable with hints of a trail-running shoe.

Although I didn’t get to spend an extended amount of time in the shoe, I got the sense it would ripen with time, losing some of its rigidity, ultimately running a bit smoother.

The outsole has a dual compound Vibram Megagrip under the forefoot and IdroGrip rubber with La Sportiva’s Impact Braking System in the heel. The combo handles loose rock and dirt terrain better than all the other approach shoes in the TX line.

If I were judging it as a pure runner, it’s not on par with pure trail-running shoes. However, as a dual-duty running approach shoe, it’s the best I’ve tested.

Outfitted with a full rubber toe rand and a generous climbing zone that extends a good distance down the big toe (even more so than it’s TX siblings), the TX Guide has plenty of edging power.

The asymmetrical lacing system extends down toward the toes for a more dialed-in precision fit while climbing.

If you want a shoe that both runs and climbs well, the TX Guide is the best shoe I’ve seen. It combines the nimbleness and comfortable feeling of a trail-running shoe with the sticky-soled edging ability of an approach shoe. The La Sportiva TX Guide will be available in late winter 2020 and will retail for $159.

Cory Smith is a Santa Barbara, California-based athlete, online running coach, and freelance journalist specializing in running- and climbing-related content and gear review. He draws from over 25 years as an elite runner and rock climber for ideas, inspiration, and expertise.

His work has been featured in Outside Magazine, Trail Runner, GearJunkie, Gear Patrol, Philadelphia Magazine, and Gear Institute. Check out his portfolio at www.storiesbycory.com.

at October 18, 2019
Email ThisBlogThis!Share to TwitterShare to FacebookShare to Pinterest
Labels: GearJunkie